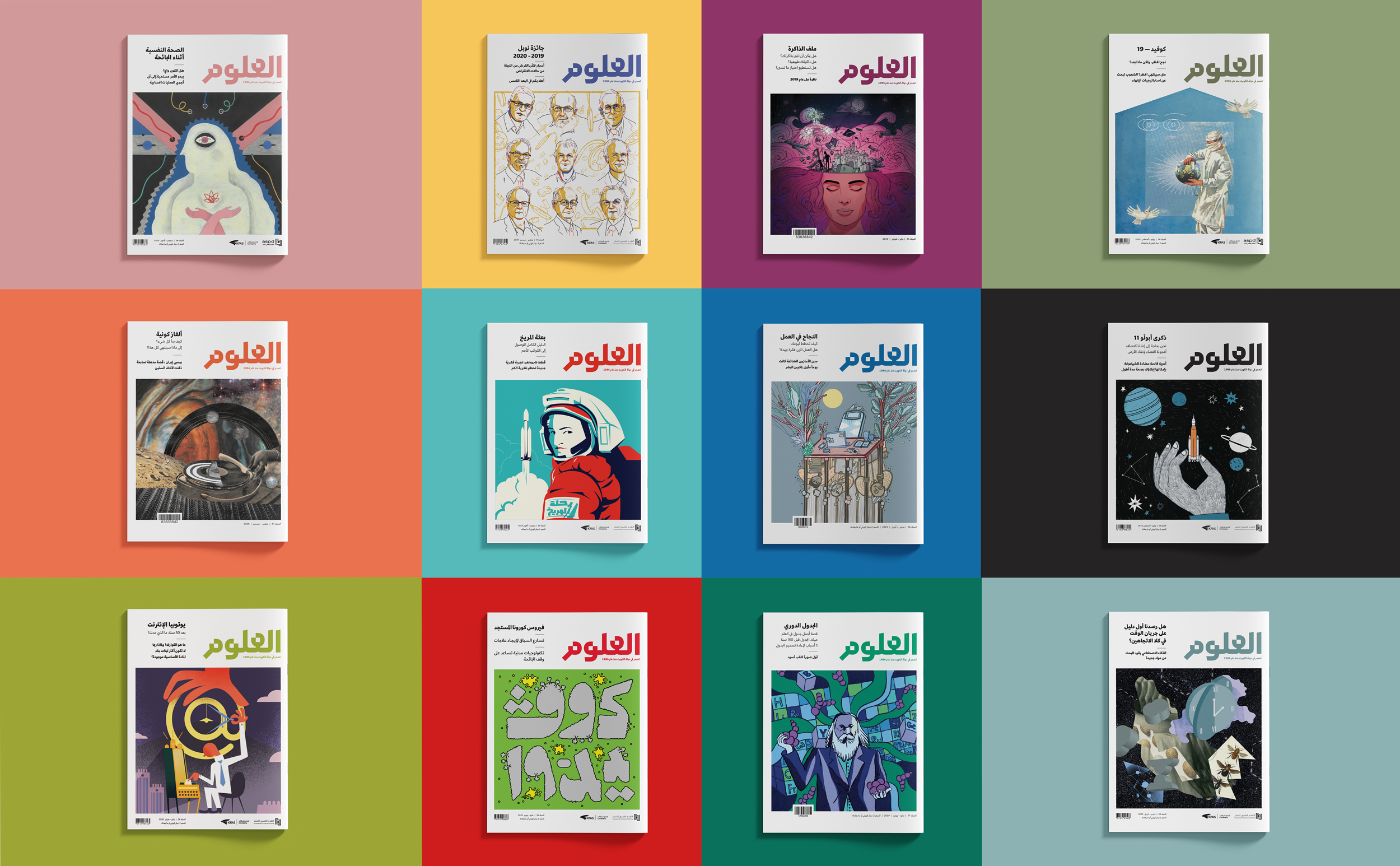 Oloom is a scientific magazine published bimonthly by the Advancement of Sciences Publishing & Distribution Company in Kuwait. So, once every two months, an entire orchestra of writers, translators, illustrators, artists, and designers put together this Arabic scientific publication. In 2018, we we were hired to bring the magazine back to life. The magazine has been published since 1986, and they were ready to redesign the magazine. Our task was to create a visual identity and design the magazine afresh.

First, we dove into collecting all the visual references we'd use to populate our imagination. The science world is ripe with images—we had such good visual brainstorming. For the logo, we found that certain shapes were evocative of the world of science and technology: the nib of a writing tool, robots, a magnifying glass, pixels. We combined these and came up with the logotype.

We also drew these two logos for Oloom's other programs: Astronomy and Science Week.

Part of redesigning the cover of the magazine, for us at the studio, meant that we were going to prioritize visuals. We don't believe in the doctrine of the scientific publishing world that is so text-heavy. We found that, more often than not, you might see one or two stock images near a science article that are either insanely abstract or extreme clichés. Redesigning the magazine became an opportunity to exercise our belief in otherwise—that design shouldn't be difficult to understand.

This is what Oloom looked like before we worked on it.

We came across this original cover of Oloom from the '80s after we started printing the new magazine. It was a pleasant surprise, seeing design come full circle like that.

We incorporated Zarid Sans & Zarid Text by 29Letters throughout the magazine. It’s a clear and contemporary typeface. This matched our vision for the publication, which was simply to create a better magazine.

Another thing we did was introduce the poster centerfold to the magazine. There wasn’t much behind this, other than wanting to find different ways of engaging readers. We thought: okay, we need something easy, something fun. It’s an added element. The poster really tied everything together.

Poster illustration by Nasir Nasrallah for the January–February 2019 issue.

This project doesn’t really end, which is one of the reasons we love it. With every issue that comes out, we're always unboxing the printed magazines with oohs and aahs and widened eyes. We go, "Oh, this is our favorite cover!" without fail, every time. That's how you know a project is good.

Centerfold for the March–April 2020 issue by Hey Porter!

The history of Arabic script in an interactive children’s book